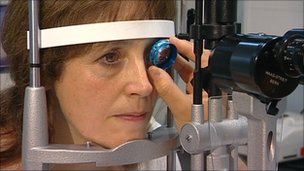 Twelve patients with Stargardt’s disease will have the cells injected into the eye. You can read more about the trial here.
Although there is great excitement about the trial, Julia knows that the initial phase will simply check safety (…)

“It would be marvellous if I could get some of my sight-loss reversed”, said Julia. “Even if it simply halts the deterioration, that would be great. And the real benefit would be for children. It could mean they don’t need to lose any sight and have normal vision.”

But doctors are urging caution. They are aware that there has been a lot of hype surrounding human embryonic stem cells, because of their potential to turn into any of the 200 or so cell types in the body (…)

It is always worth pointing out that other forms of stem cell treatments have been used successfully for many years.
Bone marrow transplantation is a well-established and proven technology.
More recently, stem cells from a patient’s own bone marrow have been used to help create them a new windpipe.

Contrast that with human embryonic stem cells, which have yet to prove themselves in patient trials. Which is why the Moorfields study is potentially important in testing this technology.

It remains controversial. The creation of a stem cell line this way begins with the destruction of a donated human embryo at the blastocyst stage, when it is a small clump of cells (…)

Those opposed to embryo research on moral or religious grounds would prefer research on adult-derived stem cells, such as those found in bone marrow.

Scientists can also now create stem cells without destroying embryos, so-called induced pluripotent stem (iPS) cells but these have yet to make it into patients (…)

Chris Mason, Professor of Regenerative Medicine at University College London points out that it was only 13 years ago that scientists discovered a method to derive stem cells from human embryos and grow them in the laboratory (…)

He said: “These stem cells are capable of forming all body tissues, and it is possible that the retinal cells formed from them will be useful in preventing age-related blindness as well as in treating certain genetic eye diseases. I believe we will now see increasing numbers of such trials in the US and UK.”

So after all the talk about human embryonic stem cells, before too long we should have hard evidence as to whether the hype and the promise have been justified.